Newtown Festival is such a great event that showcases the creative side of the Inner West. It’s a time for everyone to come together and celebrate love and diversity and an incredibly vibrant culture. Most people are aware that the festival is organised each year by Newtown Neighbourhood Centre. Many locals know where the Neighbourhood Centre is but may not have, in fact, event set foot inside the centre let alone know about the incredible work they do.

A lot of the funds raised through the festival go towards helping marginalised people in our community. As housing affordability worsens, we end up with an increasing number of humans just like you and I who, for whatever reason, end up with nowhere to live.

I spent time visiting a number of these houses in our community and sat and listened to nine gentles souls who kindly and generously shared their stories. What dawned on me is two things. It seems to be that either one major life event has occurred that has put them in to this situation or a series of events throughout their life that have led them to where they are today (and in some instances, a combination of both).

This series of stories and images was exhibited at Newtown Festival in 2016 so that festival goers understood the importance of donating at the entry gates on the day. The goal was to show where the money went but tie in with the creative element of the festival (ie through storytelling and photography).

‘My dad had a big heart attack. I was 13 and I had to drive him to town in the car. I’d never driven the car before but I’d played with the pedals and the gears while it was in the shed. After the heart attack he couldn’t drive anymore and I had to drive my mum around. It was war time and a lot of kids had to do a lot of things they’d never done before. I used to have to take mum to the town so she could see dad in the hospital. I lived in a small town of only a few hundred people so I drove under the supervision of the town policeman until I was old enough to get a licence.’ 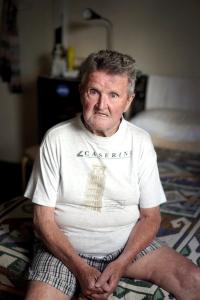 ‘I’ve made a few friends and I feel safe here. There can be up to 20 people here – I like having the people around me. Other houses have been a bit messy and disruptive – this one’s a bit quieter. Here they talk to me more. It’s important for me to have people the same age around me as they provide me with support. I feel more comfortable here. It feels like home for me.’ 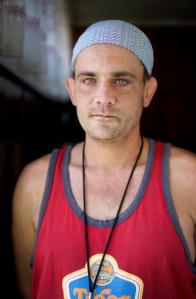 ‘It was a bad time for me but things have come together since I moved here and it’s been going very well.  It means a lot to me to have this place because I’ve stayed in a lot of places and it hasn’t gone too well. It’s really good now. I’ve had a lot of help from Newtown Neighbourhood Centre and I feel like I’ve got a good chance of doing something.  It’s stable here and I just want to keep on doing what I’m doing. I hope to just keep on trying to make things better.’ 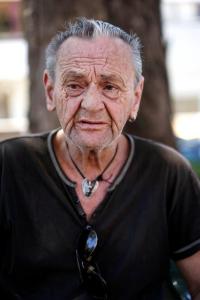 ‘I had nowhere to go. If I didn’t find this boarding house, I would have packed my bags and went on the road. I’m going back on the Department of Housing list and I’m hoping when I get a two bedroom place my daughter can come and stay. She’s my little angel with the rusty halo that keeps on falling down around her knees.’ 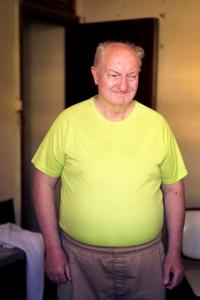 ‘The worst part is when a person leaves and I have to clean up their room – that can sometimes be pretty ordinary. In one room there was a whole lot of propane cans that you use for lighting BBQs. The bloke was  drug addict and was actually sniffing them. Recently we had one boarder leave that left 70 or 80 different size bottles of urine – and a very messy room as well.’ 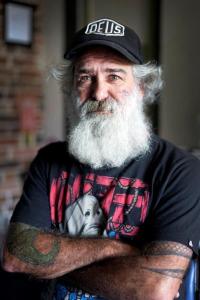 ‘I had a stroke and am out of work at the moment. It’s been a long process and I don’t know where it’s going to finish up. I have about 7% vision as a result of the stroke so I find it very hard to get around. It’s a hell of a change and I suffer a lot of anxiety and depression through it. It hasn’t been easy for me to try and adjust to this new lifestyle but I’m getting used to it. I just appreciate it didn’t take all my sight. I watch tragedies every day on the news so I’m grateful just to be here. I’m not as bad off as a lot of other people.’ 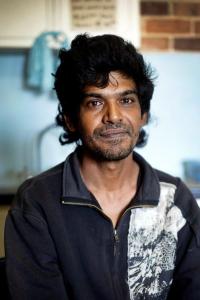 ‘I like to stay with everyone in the boarding house – it’s like family to me as I have no one here. I made curry for my housemates the other night. I always like to share food with others and here I have that opportunity to share. If I didn’t come across Newtown Neighbourhood Centre I would be surviving outside and I would have been suffering with many things like no food. My life would be destroyed by no one knowing me.’ 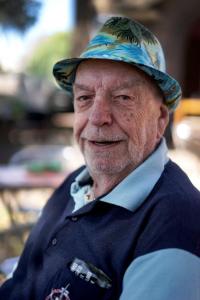 ‘I’ve been married and we had one daughter and two sons. My daughter was born in 1962 and when she was about 4 or 5 I went to work one day and came home to an empty house. My wife had taken the kids and gone. She kept in contact for the first couple of months. I asked her every time if I could see the kids and the answer was “no”. My ex-wife rung me and told me she remarried so I can only think she put the kids’ names under her married name. My kids would all be close to 50 now. I wouldn’t know them now if I walked past them in the street.’ 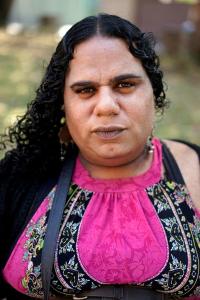 ‘Sometimes us Sistergirls don’t like to identify as transgender. We come underneath the umbrella of transgender however we like to be called Sistergirls because it is a cultural identity. A lot of Sistergirls face discrimination and rejection from their own family and often feel isolated and are left homeless. We face stigma and discrimination in the community as well as cultural barriers to transition openly. A lot of us travel to larger cities to seek refuge and solace and sometimes that isn’t even there in the larger cities. There was a lot of trauma growing up and now I’m still living with depression and anxiety. It’s funny, but I feel safer here than being back at home.’