Every year, hundreds of thousands of visitors flock to Sydney’s historic The Rocks for the annual Aroma Festival. Each year, Sydney Harbour Foreshore Authority (SHFA) does an amazing job at putting on competitions, creative works, stalls, entertainment and more – but this calls for fresh, new content every festival they host. SHFA wanted to create an exhibition that showcased the characters of The Rocks while sharing a small snippet of their thoughts. The exhibition was to feature 12 images and each image and/or story had to tie in with coffee for The Aroma Festival. Additionally, there were key messages that SHFA wanted to convey including showcasing the wonderfully unique aspects of The Rocks – the depth of history, the fact that it’s for both tourists and Sydney locals alike, world-class cuisine, diversity in what it has to offer and the handcrafted products that are found here. And so, we created ‘Aroma Shots’.

‘From eight years old I begged my mother to take me to cake shops and taste all the different pastries. I asked my mother if I could work in a kitchen. I just thought it was amazing to be part of this wonderment of beautiful things, flavours and tastes. I love that in the kitchen there’s this beautiful team spirit. It’s for a tiny bit of reward but it’s so special.

‘But at home, I’m terrible. I’ve been living where I am for six years. I’ve turned the oven on only to heat up my lounge room. I’ve never cooked anything in my oven ever! You’re a chef so I’ve got all those knives but I’ve never taken them out of the cupboard. It’s horrendous!’

‘From a spiritual point of view, I feel like handcrafted pieces of jewellery you can actually feel the energy coming from the maker. Mass-produced jewellery is kind of cold and they’re all the same. They’re just not special and there’s no substance to it. I want people to stay curious and have a sense of wonder when they wear my jewellery. I don’t want to make jewellery that’s just pretty. I want to make jewellery that has some story behind it.’ 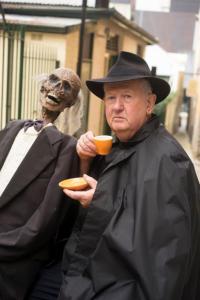 ‘The spirits stay if there is an unresolved issue like a murder or suicide. We have so many ghosts in The Rocks – the whole place is alive with ghosts. Everyone who worked at the Visitors’ Centre, when it was down on George Street, had an experience with a ghost. That’s incredible! Women are more in tune to ghosts. The harder you try, you won’t see a ghost. That’s why theatres and hotels are full of ghosts, because people are relaxed. When people tell a story about seeing a ghost, it’s usually when they were a child because they don’t push it, it just happens.’ 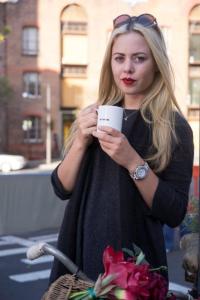 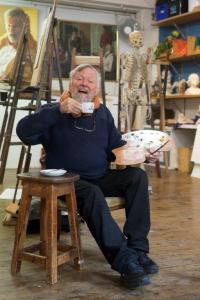 ‘The greatest freedom in the world is that blank piece of paper or that blank canvas which is a total universe and which you have total control over. No one’s going to tell you what to do with it. It’s a fantastic thing. The reason we value art is that it’s the ultimate soliloquy – the ultimate selfie if you like!’

‘These small rooms behind us were cells where the prisoners used to stay. You feel a great sense of history working here. It’s not like a museum – it’s more interesting than a museum. You can feel the stories hidden in the building itself. This building is the coolest building in The Rocks. Customers love the fact that it was a real police station. They like to see what’s here and have their coffee or meal in a real cell.

‘Apparently you can find ghosts here but I haven’t felt anything different. I think it’s probably about perception. Who knows?’ 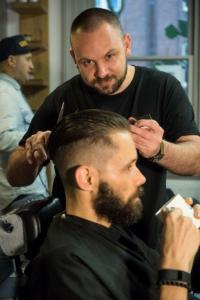 ‘I think sometimes people underplay just how much guys do like to have a chat whether it be about the football or anything a whole lot deeper. A visit to the barbers is a good opportunity for a bit of a chat. They might divulge their deepest darkest secrets to us but we’d never say whether they did or they didn’t!’

‘Everybody has psychic ability. It’s simply that I was interested in developing it. We all have intuition. It’s not deemed to a special few.

‘One of the highlights of my career is knowing. There’ll be a couple of people I feel like I’m meant to talk to and I’m meant to give some kind of message to. That’s the most validating, heart-warming thing that I find.

‘When I’m not working, I try not to be working. When I’m giving a reading people need my complete intuition and power but in my own life, I just want to be a normal person.’

‘I recently went to Melbourne and smashed through 22 cafes in two days. I had a lot of coffee! I’m a photographer and I enjoy being creative and artistic and that carries across to the latte art that I do. I think work is just boring if you can’t have fun with it. I always aim to implement some kind of passion or something artistic in to my work every day.’

‘My husband and I were travelling in South America and lived on a cacao plantation in Ocumare Valley in Venezuela. We had real chocolate made from 100% cacao. We were transfixed by it and wanted to know how to make it.

‘The valley was beautiful with the ocean on one side and mountains on the other. Because it’s so isolated, the beans there are quite pure. We now travel the world looking for the best ingredients. We talk to the farmers and try to have a traceable supply chain and as far down to the farm level as possible.’

‘We’ve drawn a lot of inspiration from Brooklyn and New York. There’s a really supportive local community where this can feel like someone’s local whereas most people assume The Rocks is a touristy place. We are a bit hidden but we do get sort out by tourists. The Rocks is a little oasis. It’s so close to the city and has a chilled out vibe. It’s a great atmosphere to work in with the harbour there. As stressful as Sydney is, you’ve got the harbour there and you’re a little bit out of the city.’

‘The Rocks is transitioning. It’s an eclectic mix of older people that live in the area, Sydneysiders and tourists. We’ve got customers that have been coming here since the pub opened including one group that call themselves the “Cark-it Club”. They’re in their eighties and are ex-AMP employees that worked at the AMP building at Circular Quay and came here for regular business lunches. Since retiring they get together every Friday. It’s a place that hasn’t changed or lost any of its character. For them it’s familiarity.’

The images on display in The Rocks 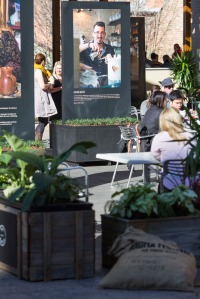 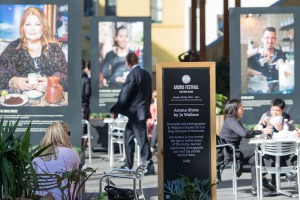 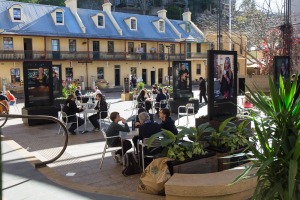